CARLSBAD, Calif. (March 18, 2022) - TaylorMade Golf Company, an industry leader in innovation and technology, has been on a constant quest to bring Tour level golf ball technology to the everyday golfer at an affordable price. Whether it’s the 100-percent cast urethane cover in Tour Response™ or the Extended Flight Dimple Pattern in Soft Response, TaylorMade has continuously provided high level innovation in both three-piece golf ball offerings.

Today, TaylorMade brings ultimate Tour Level DNA to Tour Response by integrating the Tour Flight Dimple Pattern seen in TP5/TP5x, as well as the revolutionary new 360° ClearPath Alignment with Tour Response Stripe™. In addition, the company announces the launch of its softest golf ball from cover to core with 2022 Soft Response.

Relying on the continuous commitment to pushing the boundaries of performance, the all-new Tour Flight Dimple Pattern of Tour Response unlocks next-level aerodynamics while promoting maximum carry distance. This tour proven technology, found in TP5 and TP5x, has been added to Tour Response for the first time.  With the addition of the new dimple pattern, Tour Response still retains a soft feel and 100% cast urethane cover. 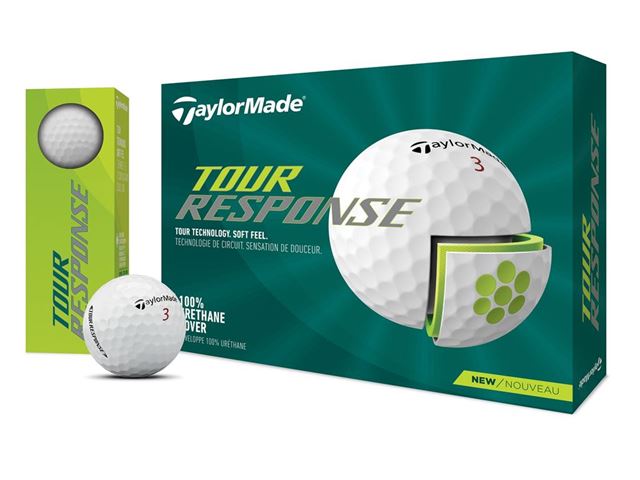 The new dimple pattern paired with a 100 percent cast urethane cover simply creates a softer version of a Tour level ball made for the everyday golfer that is looking to reap the benefits of our tour proven technology at an affordable price.
Mike Fox, Director, Product Creation Golf Ball 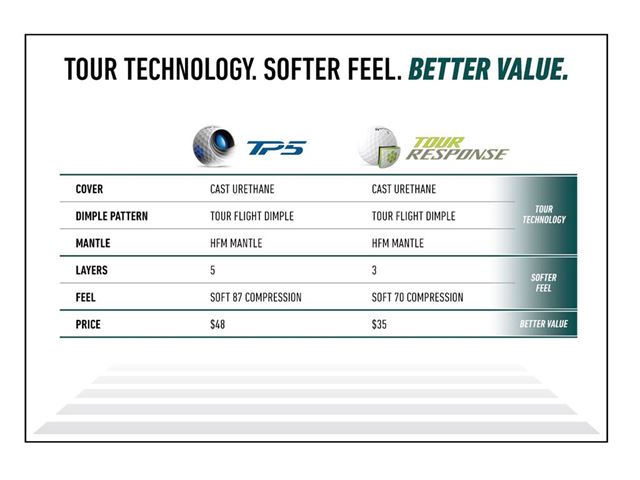 With the addition of the Tour Flight Dimple pattern, Tour Response technology now exhibits even more technology that is in the TP5/TP5x golf ball players like Rory McIlroy, Dustin Johnson, Collin Morikawa and our Team TaylorMade athletes are playing on professional tours around the world.

For as long as there have been urethane golf balls, Tour players have used them. It’s the industry standard for premium performance in golf balls. Tour Response is engineered to respond to the individual non-tour golfer’s game with a 100% cast urethane cover for significantly added greenside spin and better feel vs. ionomer. 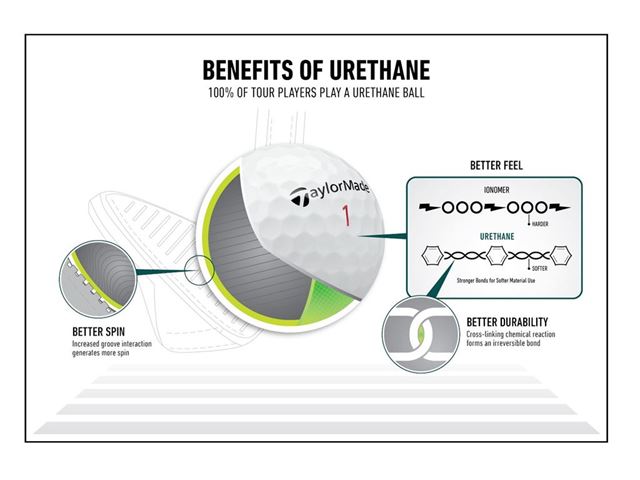 A crosslinking chemical reaction forms the soft urethane material, which creates an irreversible link for improved shear resistance and greater durability in addition to the soft feel and added greenside spin.

To measure the effectiveness of a new cover, TaylorMade engineers utilized a combination of material property testing, robot and player performance testing. That research showed that in addition to increased durability, the new cover material is 12% softer and 36% more flexible than the previous material.

The 2022 Tour Response ball also features a low 70-compression design with a Hi-Spring core made for pushing the boundaries of ball speed in a soft feeling golf ball. 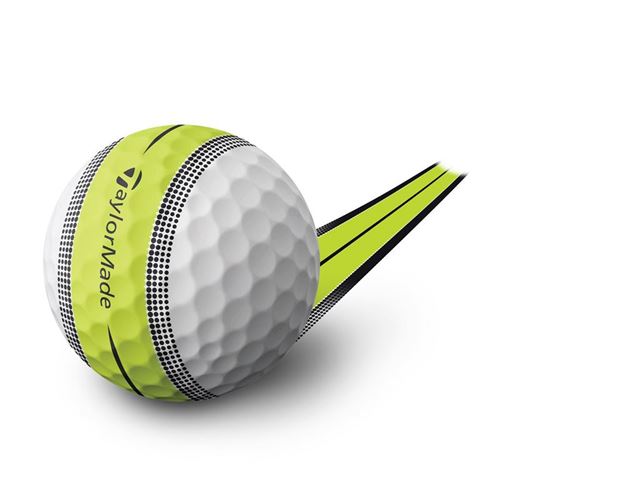 This next-gen visible technology of Tour Response Stripe is a 22-millimeter digital band that wraps around the center of the golf ball to help aim putts better, faster and more consistently. Inside the digital band is a thin black line to match with putter sight lines for immediate aid in alignment.

The multi-color design of Stripe not only creates better alignment, but also can’t miss feedback on the quality of the roll of each putt. Proper strikes are easily identifiable as the stripe rolls consistently to the hole, while off-center strikes cause a can’t miss wobble of the digital band.

Lastly, the dual-color design allows you to see your product clearly all over the course. 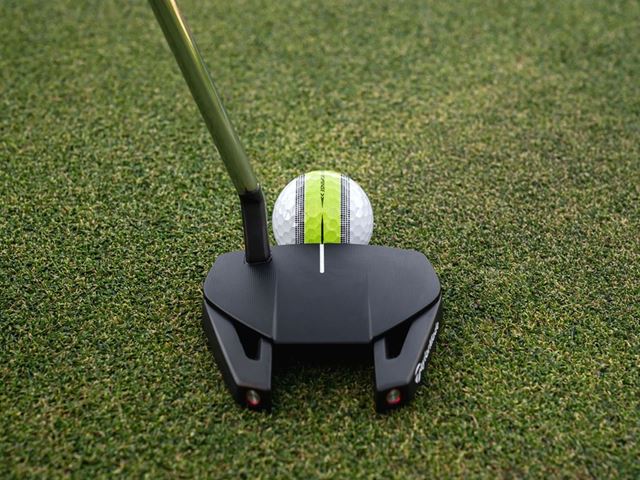 Tour Response already separated itself from the competition with overall materials and performance, but now with Tour Response Stripe it will also give golfers the feedback needed to boost their performance on the greens. We have seen many professional and recreational golfers take advantage of Clear Path Alignment in our pix golf balls, and now with the 360° design of Tour Response Stripe, alignment aid gets even easier for the everyday golfer.
Mike Fox, Director, Product Creation Golf Ball 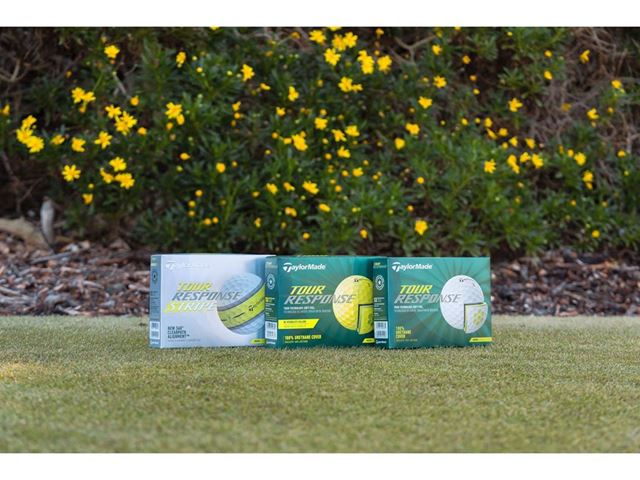 Tour Response and Tour Response Stripe are both available at retail on March 18 with an MSRP of $39.99 USD. Tour Response is available in white and high visibility yellow, with an all-new enriched yellow urethane cover to help prevent chipped paint and provide bright visibility. For more information, visit www.taylormadegolf.com.

With increased softness from cover to core, Soft Response is the softest ball in TaylorMade’s arsenal, designed to give amateur golfers enhanced feel while maintaining ball speeds and distance. Soft Response is designed for moderate swing speed players with a new, softer core and a re-engineered ionomer cover for added greenside spin. 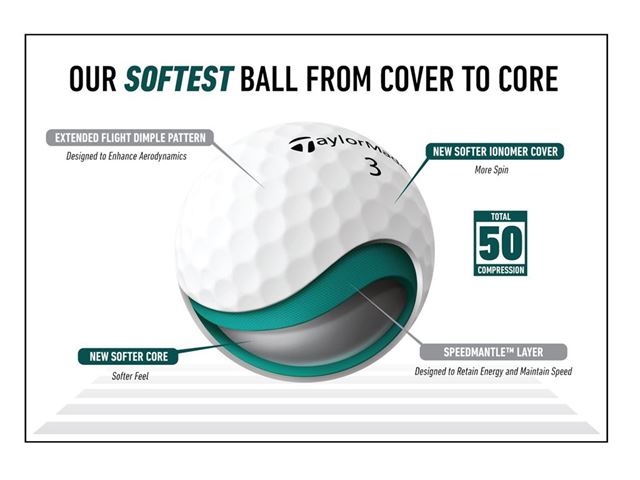 The changes produce a softer ball with an overall 50 compression (versus a 60-compression rate in the previous generation). An added SpeedMantle layer in its 3-piece construction creates an efficient energy transfer at impact, resulting in a softer ball that enhances feel and maintains both ball speed and distance.

Normally if you go that much softer it is hard for the product to be as long as its prior generation, but we took advantage of the three layers of this product, which is unique at this price, to build up speed. In addition, Soft Response maintains game changing distance at an incredible soft feel to become a true game-changer in this category.
Mike Fox, Director, Product Creation Golf Ball

A unique Extended Flight Dimple Pattern decreases drag and optimizes lift, allowing the ball to stay in the air longer at lower speeds and lower spin rates. It completes a harmonious design, with all features working in unison to elevate performance for players with slow-to-average swing speeds. 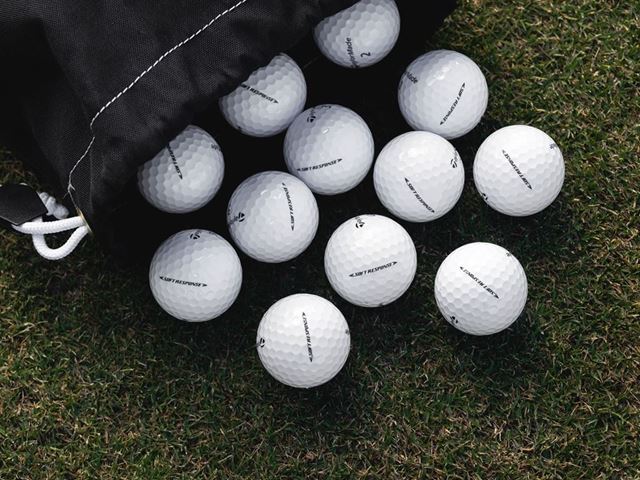 Soft Response was tested, reviewed, and affirmed at every stage of development by everyday golfers, becoming a golf ball that responds to your game and performs where you need it the most.The 3-layer construction in combination with the SpeedMantle builds resistance against the club face to build energy and create ball speed at this new softer feel. 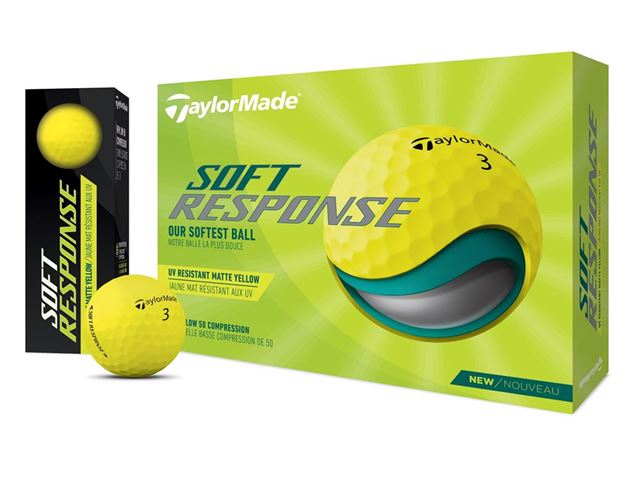 Soft Response is available at retail on March 18 with an MSRP of $29.99 USD in white and high visibility yellow. For more information, visit www.taylormadegolf.com.